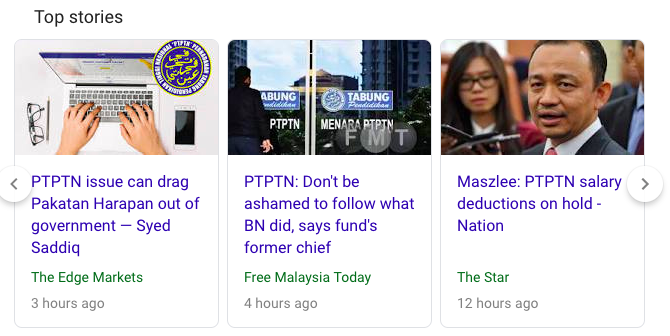 Wow, what a furore it was when it first dawned on PTPTN borrowers that the new Pakatan government won’t be writing off their PTPTN loans after all. Then adding oil to the fire, the PTPTN chairman has proposed a tiered automatic salary deduction schedule changing the approach for the popular student loan collection from voluntary to mandatory.

The latter proposal is now on hold due to the fact that some who are already earnestly paying back their loans may suddenly find themselves paying more monthly under the tiered schedule.

(PTPTN, or Perbadanan Tabung Pendidikan Tinggi Nasional, is a Malaysian government authority that disburses around RM4b-RM5b yearly in student loans to qualifying Malaysian students to pursue their tertiary studies in Malaysia)

What normally gets ignored is the fact that PTPTN is actually one of the best thing that has happened to students and families looking for a way to fund their higher education. I mean where else can you borrow money at 1% interest with repayment spread between 5 and 20 years?

Additionally if you choose to settle the loan earlier, you would get a discount of 10% or 15% (there’s also an ongoing promotion in 2018 of 20% discount). In the real world, banks will penalise the borrower for trying to settle a loan earlier instead. These guys who are complaining will get a rude shock when they try to buy a car or house with bank loans later on in their life.

The fact of life in finance accounting is this: if students with PTPTN loans are getting such a great deal, someone else must be bearing the burden. The credits and debits must balance! That someone else is the Malaysian government treasury and eventually everyone else.

Think about it. How can PTPTN survive by lending money at 1% interest but borrowing at a higher interest rate? Additionally, it’s giving discounts to early repayments and waiving it entirely for 1st class honour students. In 2015, PTPTN is paying interests on the money that it borrowed of around RM1.5b. That’s about 1/3 of the amount that it gives out in student loans yearly.

To make things worse, a big number of PTPTN borrows are hiding themselves to avoid paying back their loans.

No wonder it’s now sitting on a debt of RM 39b.

Can any government write off this debt? It wouldn’t be fair to those who have paid back their loans. Why should those who break their agreement on paying back their PTPTN loan get rewarded? Also it would give additional strains to the government treasury to lose RM 39b. Keep in mind that this amount is just a tad lower than the 1MDB debt.

In a different post I’ll share some thoughts about how we can manage our finances to cope with student loan repayments (and any other sort of debt repayments).

View all posts by siesing

This site uses Akismet to reduce spam. Learn how your comment data is processed.